Everything I Know About... I Learned From....

Take a look at a series of articles I wrote based on things I've learned from my all-time favorite movies! 😋

Everything I Know About Consulting I Learned from The Ghostbusters 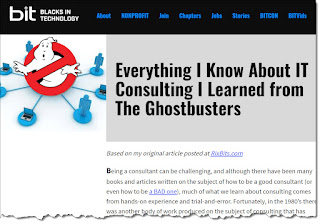 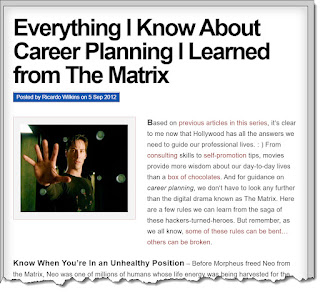 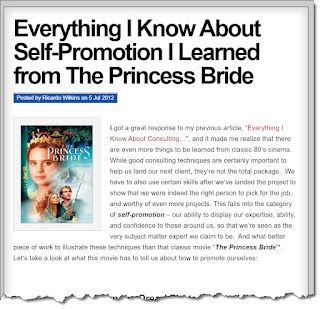 Posted by Ricardo Wilkins at 4:41 PM No comments:
Email ThisBlogThis!Share to TwitterShare to FacebookShare to Pinterest

Based on previous articles in this series, it’s clear to me now that Hollywood has all the answers we need to guide our professional lives. : ) From consulting skills to self-promotion tips, movies provide more wisdom about our day-to-day lives than a box of chocolates. And for guidance on career planning, we don’t have to look any further than the digital drama known as The Matrix. Here are a few rules we can learn from the saga of these hackers-turned-heroes. But remember, as we all know, some of these rules can be bent… others can be broken.

Know When You’re In an Unhealthy Position – Before Morpheus freed Neo from the Matrix, Neo was one of millions of humans whose life energy was being harvested for the machines. Sometimes your job can be rather one-sided – you may feel like your time & talent is being used up, without a reciprocal feeling of reward. You have to be able to identify when you’re in an unhealthy position in your career. Signs of this are a lack of career mobility, and a culture that asks for long hours and extra work without an attempt to recognize or reward the effort. You’ll have to determine when it’s time to unplug.

A Mentor Can Help – A call from Morpheus helped guide a naïve Neo throughout the cubes and corridors of his office in an attempt to escape apprehension by the Agents. If you have a mentor at your job, especially one that has been in the organization for a long time, they may be able to help you understand the social or political ins-and-outs of the job, and can give you good advice about how to proceed with your career. A mentor, of course, is someone you can trust, and whose help stems from a desire to see you succeed. Try to gain a mentor relationship with a seasoned person at your job, or perhaps be a mentor to someone else.

Imitate Others, but Avoid Unhealthy Career Choices – Trinity remarked to Neo that “…you move like they do…”, after seeing him dodge a flurry of bullets fired from the gun of an Agent. Just as Neo’s imitation of his enemies’ techniques helped him in a crucial situation, we can also help ourselves in our career by making choices similar to those we’ve seen made by others, especially when the outcome of their choices match the outcomes we’re hoping for. But be careful – career planning is not a one-size-fits-all adventure. What works for someone else may not work well for us. Be prepared to dodge a career-ending bullet that may come in the form of a career decision that is not the right fit for you.

Use Your Colleagues for Tips & Advice – While waiting to be interviewed by The Oracle, Neo met a young friend with an interesting ability to bend a spoon. The boy later enlightened Neo that the secret was realizing that ‘there is no spoon’. Many times, our colleagues and peers may have good tips and advice for us regarding our career. Although we should carefully discern the good advice from the bad, we should be open to listening to the thoughts of our peers & friends in the organization when we ask their advice about our career options. You never know – one of them may be able to give you just the right tip you needed to take you to the next level.

Know When to Say “No” – Neo had to make many key Yes/No decisions on his path to becoming The One. He said Yes to Trinity’s invitation to meet Morpheus. He said Yes to Morpheus’ offer to take the red pill and learn the truth. But his most important decision was when he said No to the bullets flying at his head in the final battle scene with the Agents. It was this No that marked his enlightenment, and his transformation into The One. You, too, will have many options presented to you – both in your current position, as well as from offers by other companies. However, not all of them are what’s best for your career. Be prepared and willing to say No to options that don’t have your best interests in mind.

Although the Matrix isn’t real (or is it???), the career decisions that we make definitely are. But with careful planning, you can make the kind of decisions that set you on the right path, and bring you closer to the day when you can finally ‘free your mind’. : )

Posted by Ricardo Wilkins at 2:47 PM No comments:
Email ThisBlogThis!Share to TwitterShare to FacebookShare to Pinterest
Newer Posts Home
Subscribe to: Posts (Atom) 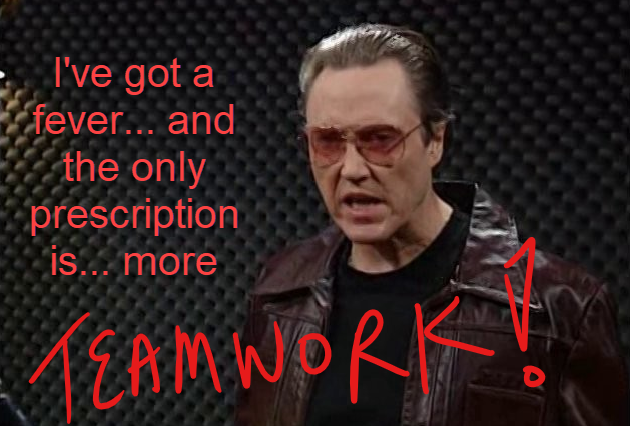